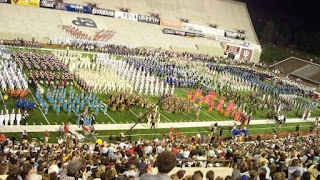 While it's not yet a done deal, it's looking more like I'll be making it to two drum corps shows this summer. Carolina Crown's event arm has brought back its early season show, CrownBEAT, and a friend and former fellow band member of mine have been talking about going down to South Carolina to see it. If we make the trip, it'll be my first true multi-show season in a few years: Last year, as money and time was tied up in a home purchase, we went to Crown's preview show and were lot rats at NightBEAT; two years ago, car trouble kept us from NightBEAT in Charlotte, so we "only" made it to Championship weekend semifinals.

Since the advent of the Tour of Champions concept, the closest show has been such an event. NightBEAT, which has called Rock Hill, SC; Charlotte, NC; and now Winston-Salem, NC home has featured the seven corps who constitute the series, plus whoever joins them at that show in any given year. While I expect no sympathy for being forced to watch seven of the best in the activity year after year, I do appreciate that catching an additional show allows me to see some of the mid-majors.

The term, which many will recognize from college athletics, is a fitting one for several of the corps that make up the next tier behind the G7. Several of the corps I look most forward to seeing are perennial or near-perennial finalists, while others may dance near the border of top-12 territory or pray each year to make it to Championship Saturday. At FirstBEAT this year, I'll get to see the activity's Mountain West and Big East/American: Boston Crusaders and Madison Scouts, respectively: Boston is a force each year, and often finds its ranking among the top corps (a similar case could be made for Blue Knights, who also share geographic interest with the Mountain West); Madison shares that distinction, but is also the only existing corps from outside the Tour of Champions group to have actually won a championship. CrownBEAT will bring both of those, plus a few more corps I always enjoy seeing: Crossmen (formerly of northern Delaware, like yours truly), Jersey Surf (from right across the bridge), and Spirit of Atlanta (who will be playing Georgia this year!), along with The Cadets and Bluecoats from the Tour of Champions group, and Legends from Open Class.
at 12:36 PM

Email ThisBlogThis!Share to TwitterShare to FacebookShare to Pinterest
Labels: DCI