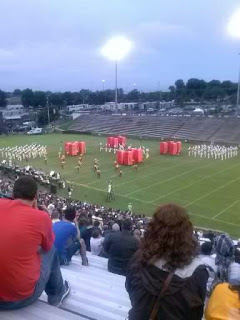 While no one's asked for it, I feel the need to make a quick clarification for my guard folks. In my recent March/April Staccato, I was dismissive of the weekend following the Final Four, as its highlights are baseball, golf, and WGI. I've gone on record as not being particularly fond of baseball (though opening week holds a special magic) and I care so little about golf that I'm not sure I've so much as mentioned it. But my feelings about WGI are a bit different. Both my marching band and dance roots give me an appreciation of guard, but as a standalone activity, I don't follow. So while I can appreciate individual shows and have a great time at an event, I'm not attuned to the bigger picture.

Put another way: for me, it's all about context.

I can enjoy a Carolina Crown on its own merit, certainly, but how are they doing relative to the Blue Devils? Sure the Eagles got that win, but they're still not going to make the playoffs. I tend to enjoy the sports/activities that I do in the micro and the macro. With guard - and it should be noted, I feel the same about WGI Percussion, and [no data available] for WGI Winds - championship weekend doesn't mean as much since I don't have a dog in the fight and I'm not there. Still though, I'm excited that a sizable swath of marching arts fans descend upon Dayton to enjoy what they love!
at 4:36 PM

Email ThisBlogThis!Share to TwitterShare to FacebookShare to Pinterest
Labels: WGI