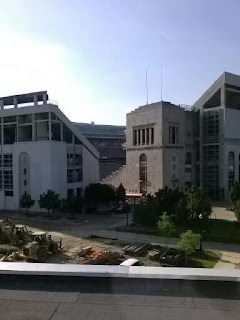 If the subject wasn't enough, the title certainly caught me.

"Sex, Scandal and the Marching Band: Inside the New Rules at Ohio State" - a recent Rolling Stone piece focusing on the Ohio State Marching Band - was a must-read that caught my eye late Friday afternoon and had to wait until after work to be consumed. That work - on a college campus, working specifically with fraternities and sororities - made the Rolling Stone source all the more interesting. The same publication, after all, put out a later-withdrawn damning piece regarding the fraternity culture's role in the campus rape epidemic at the University of Virginia that was generalized by many to fraternity/sorority life as a whole. That they'd be moving from my vocation to my avocation was of interest, especially given the recent controversy at Ohio State and their band finding itself in situations - namely hazing - that we usually associate with fraternity/sorority life.

The article specifically addresses the "new normal" where Ohio State's band finds itself: Under interim direction for the second year, and with oversight from the university in hopes to change the culture. The degree to which the culture needs changing is a point of contention among current and former band members.

It speaks to the unique space The Best Damn Band In the Land occupies: Massively successful in their own right, tied to an upper echelon football team, and yet still on uneasy ground. It foreshadows a dystopian future - if TBDBITL can't ward off Seven Nation Army over the loudspeakers, what hope does anyone else have? - where even the most highly visible marching band has to cede time during a college football game to Dr. Pepper passing contests and other trappings of the increased pro sports atmosphere infringing on the uniquely college setting that includes, and should feature, the marching band. Still, Ohio State is flush with riches - though not without strings - and recently performed in London for the NFL. It even addresses the cocurricular nature of a college band: A credit bearing class, a student organization, and so much more.

This chapter of TBDBITL can't be told without their recently fired director, Dr. Jon Waters, who features prominently in the piece. Waters ushered in the new era of innovation in drill, but shadows of the previous era proved his undoing. In an atmosphere of increased concern for campus safety, guarding against sexual misconduct and interpersonal violence, and hazing prevention, Ohio State's transgressions could not be allowed to continue. Even their association with athletics, the two ton tail that often wags the collegiate dog, managed to save the band, but not without the loss of the man in charge, a fate that befell none less than Jim Tressel and Woody Hayes from the same football field.

While the Ohio State band is the story's protagonist, the piece does not shield them. It even directly references hazing (though it also fails to in some areas where it is appropriate) and the conduct that led us here. The story is told through the members, from the drum major and former director on down, and highlights the tension that remains in the aftermath. It is well worth the read.
at 3:18 AM