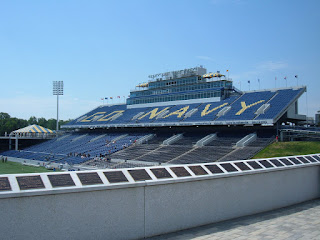 While there are some who feel that Friday nights should be reserved for high school football, I've long enjoyed them for college - especially when they present the opportunity to get a win out of the way and go into Saturday already feeling good. This past week, that was the case for USF: After a thorough drubbing of Cincinnati, our second most played rival, I got to put up my feet and root for a Memphis victory over Temple, which would have put USF in the driver's seat for the Eastern division. The boys from Philly held serve, though the Bulls still have a shot, should they beat C. Florida - which much as I'd like to, I'm not taking for granted - and a hot-handed UConn squad which just knocked off a previously undefeated Houston takes out Temple. The fact that I'm even in a position to discuss potential championship scenarios is more than I could have asked for, but the Bulls are looking better than they have in about five years right now.

On the other side of the conference, Houston and Navy meet Saturday for the de facto Western division championship. I tend to root for chaos as it relates to the national championship picture, and a Navy win could point to that: Should Navy win the conference, they'd be in contention for a New Year's Six bowl as the highest ranked group of five champion. But wait! Should #24 Toledo make it to the MAC championship game and win, they could very well be waiting into the wings, meaning a Navy loss could put them in. That would mean we'd have to wait until after the Army-Navy game to set the bowl field. For that matter, there's a chance - albeit very slim - that if the perception of Navy, and in turn their opponents, is predicated on their win-loss record, the committee could choose to wait until that game played out to see how to regard a top 4 cusp team in Notre Dame. How crazy would it be?

It's been a banner year for the American, but the sad truth is, excellence will be hard to sustain at even the top performing programs, because schools with more money, talent, and resources will always be looking to poach coaches. As long as the American sits outside of college football's power structure and had a glass ceiling with respect to championship access, the coaching positions will be but stepping stones to major programs. Memphis and Houston are already reportedly preparing to throw tones of money at Justin Fuente and Tom Herman, respectively to try and keep them put. If they and other top performers like Navy's Ken Niumatalolo, Temple's Matt Rhule, and if he can keep up the good work, even USF's Willie Taggart stay put with the intent to build for a few years, the American can continue to rise.
at 4:36 PM