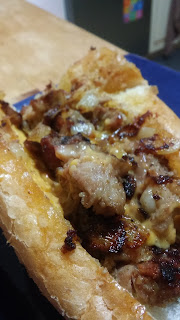 This is not the time or the place for humility. I did the damn thing.

I made the plan to head to Eagles at Panthers as soon as the NFL schedule came out, but the tailgating inspiration came a bit later. I am, of course, a Delaware Valley product currently living in North Carolina, and after my friend Jesse posted her tailgate for the Saints game with a New Orleans-themed menu, I thought I'd follow suit. While I was unequivocally repping Philly on the gridiron, my creation was a little more bi-partisan: Carolina BBQ cheesesteaks.

First, I feel the need to note that while that's the name I settled on, I'm not culinarily obtuse enough to leave "Carolina BBQ" unqualified. I live in the Triad, so my BBQ was stylistically Lexington. What started as an idea gained a little more traction when I realized my parents were visiting the week before, and Amoroso's rolls from home were an option. I smoked the pork shoulder, made the sauce, and prepared toppings (fried onions and peppers, though only the onions got any use) the day before, and packaged for cooking/reheating on the grill in the lot. I bought provolone and Cheez Wiz and provolone - which I promptly forgot in Greensboro and had to buy in a Wal-Mart en route to Charlotte - and headed down with high hopes.

The verdict? Delicious, and it's not just me saying that. While my North Carolina native friend Hannah pointed out that my chopped BBQ pork wasn't as authentic as it could have been (I'll remind you I'm a transplant) the consensus is that the final product was some good eatin'. I've since recreated it in the kitchen with that which remains, and this may have to be a repeat engagement for the next time the Birds are in town.
at 10:36 PM