Every year, Carolina Crown holds their preview before leaving for tour at their spring training site, Gardner-Webb University. Every year to this point, I'd thought the two and a half hour drive was a bit much to travel for one corps and one show.

This year, I made the trip.

It was a combo of sorts: My daughter's been itching to go camping. We have a KOA membership, and their Spartanburg/Gaffney campground is a half hour from Boiling Springs and also close to some friends of mine. So with that justification in hand, we folded the preview show into a great weekend.

The preview day started with a friends and family luncheon at the Gardner-Webb student center. They've got a beautiful campus, and naturally the higher ed nerd in me had to poke around a bit. We spent a bit of time on campus before heading over to the stadium, catching drumline and pit warmups before the show began.

As it's still the preseason, this was the earliest in any corps run I've seen them. It was strange hearing bumps in Crown's perennially perfect brass, but I was left with no doubt they'd iron those out. The show, Inferno, was as dark as I've ever seen Crown. As I quipped during the show, this isn't a Spirit of Disney award winner, unless we're talking the Night on Bald Mountain scene from Fantasia. It felt like a heel turn; I don't know that that's a bad thing, but it will take some getting used to coming from this corps. Still, their Ode to Joy ending felt like a drawn out Picardy third in an otherwise minor show.

I was particularly excited that Verdi's Dies Irae was a part of this show, as it's a piece I've played before. The runs will be sweet once the brass is in mid-season form, though I was hoping the trumpet trio would be included. there's some cool visual as well, including all of the brass being enshrouded in gossamer. 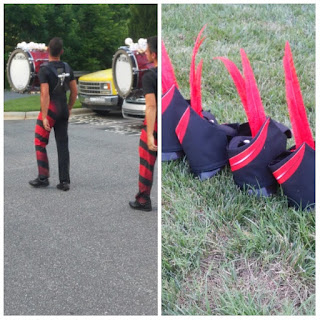 Ever since Crown's championship season and the #purplepantsband uniform change, the anticipation of the coming year's uniforms has been a story unto itself. The style has remained the same since that season, but the pants color and accents and accoutrements have changed with each season. While it's admittedly "get off my lawn"ish, I long for the days of the Cream Team. While I think this year's set goes well with the show theme, I'm also not the biggest fan of annual uniform changes, so unless they're going back cream, it's a story that doesn't hold my interest too heavily.

Between Crown's preview showand the DCI dress rehearsal available for free viewing online featuring the Troopers and Madison Scouts, my appetite is sufficiently whetted for the coming season. Assuming that Golden State puts away the NBA Finals in a few short minutes, as seems likely, there'll be a layoff of less than a day between the end of the NBA and the start of DCI. If we can get a bridge on the other side between DCI and college football, we'd be all set.
at 11:27 PM