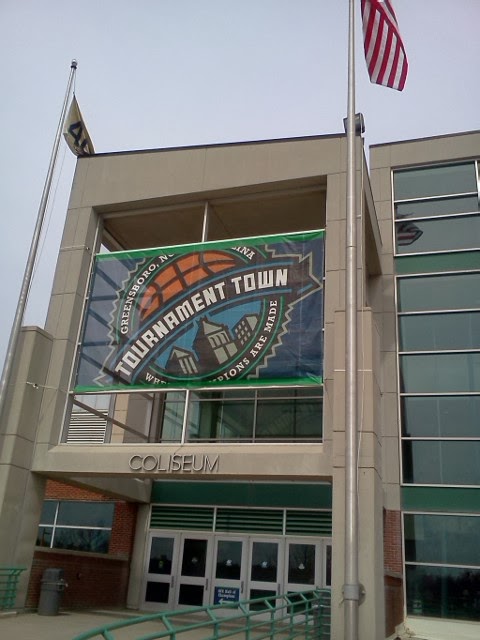 I did - and am currently doing - something this week I haven't done in a bit: watch basketball.

Football has always taken precedence in the two or so months that the two sports overlap. But this year has been basketball all but iced out until football ceded time. Usually, by this point in the season, I've at least kept one eye on the court as a season ticket holder for UNCG. But this year, for the first season since the Spartans started calling the Coliseum home in 2009, I decided not to renew. My attendance had already become more sparse, both with job responsibility changes and spending family time at home, but since my son was born just over a year ago, I had dropped off completely, so instead of renewing something I would rarely use, I decided this year I would do without. As a result, and perhaps helped by prolonged interest in football season with the playoff, I've been very light on the roundball.

Which isn't to say I don't love basketball. Indeed, I'm relatively certain that college hoops is sport and level I've seen the most of live, adding at the very least four years of pep band to five years as a season ticketholder and many more individual games and tournaments attended. I love college basketball, even though I tend to limit myself to two months and change giving it my full attention. And as much as 80 Minutes draws its name and most of its content from marching band, I actually spent more time as a pep band member than I ever did marching.

My transition includes the media I imbibe. While college football and marching remain a common thread all year, football podcasts give way to basketball ones. And as I'm not the only one who yields for football until it's over, I watched the first basketball College Gameday of the season this morning

While my time with the sport is fleeting, I try to hit it hard when I hit it. A few years ago I did my first Basketbinge two seasons ago and hope to repeat that at some point soon. I'll be heading north in February for pep band alumni day at my alma mater. And my March will truly be mad as Greensboro hosts the ACC women's tournament, men's tournament (for the last time in five years) and a regional in the women's NCAA tournament. So what I lack in volume, I hope to make up for in quality.

So while I'm the one who's just getting here, welcome back, basketball.
at 12:28 PM