Orange is the new... 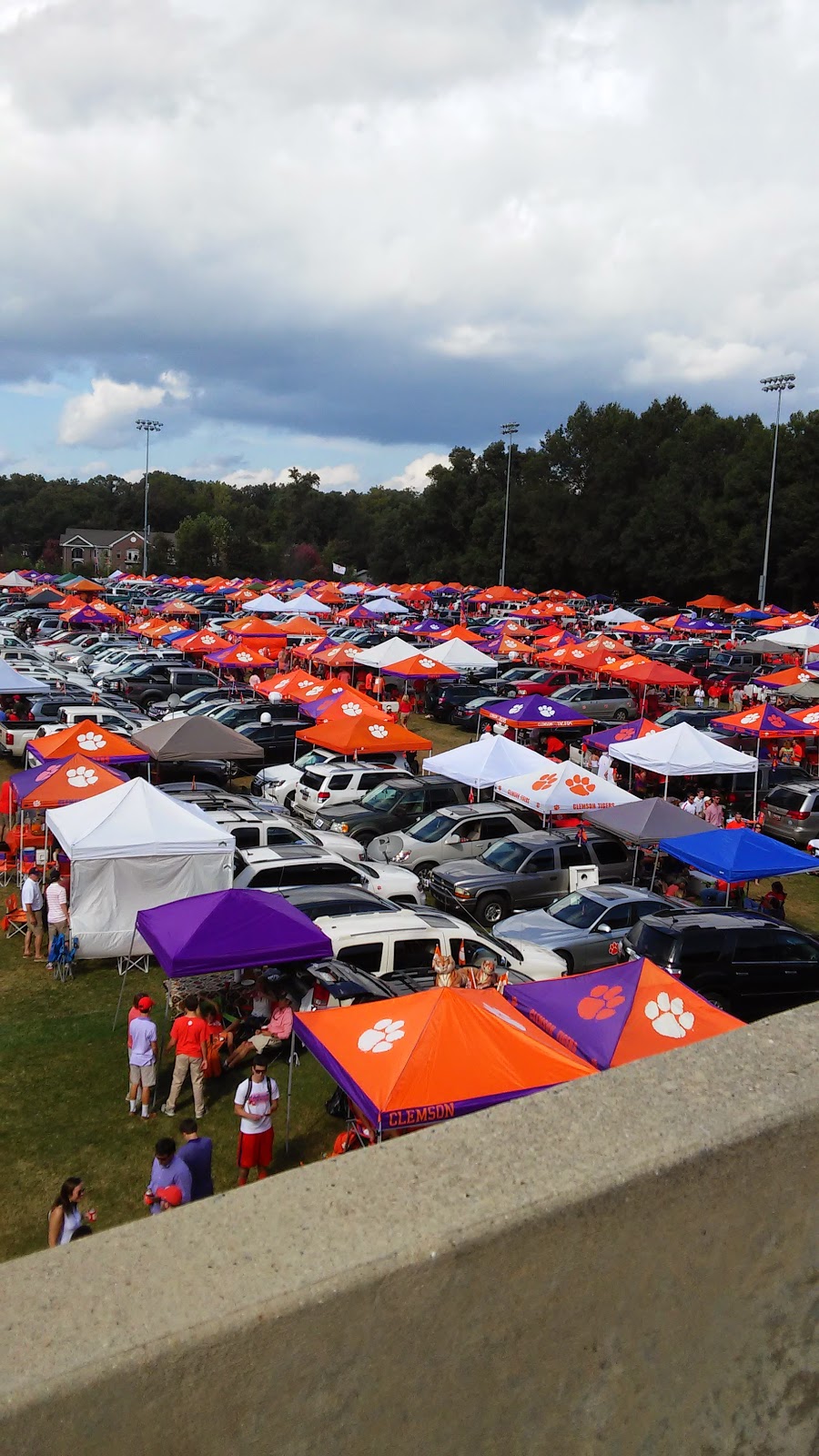 Some mornings, it's easy to get up; usually, it's because there's something on the other end that makes it all worth it. So when my alarm clock rang on a Saturday morning at a time typically reserved for work days, I had no problem throwing back the covers, getting ready, and hitting I-85 southbound en route to a day of tailgating, football, and marching band in the Southland. I had packed the grill, cooler, and other such sundries in the minivan (yes, that's how I'm rolling these days) and was ready to go.

To say I lack focus on gameday is an understatement. More often than not these days, I'm attending a game and visiting a campus for the first time. So as much as I love marching band, I also love tailgating, gameday traditions, and getting a look at campus while I'm there. Thankfully, my buddy Brian was able to rein me in, and we made the plan to settle for beers-and-a-bumper and local eats instead of breaking out the grill, and check out Tiger Walk, which he and his son had not yet seen, as well as the Tiger Band's pregame concert, which takes place 90 minutes before kickoff. It seemed sound to me, but the best laid plans... 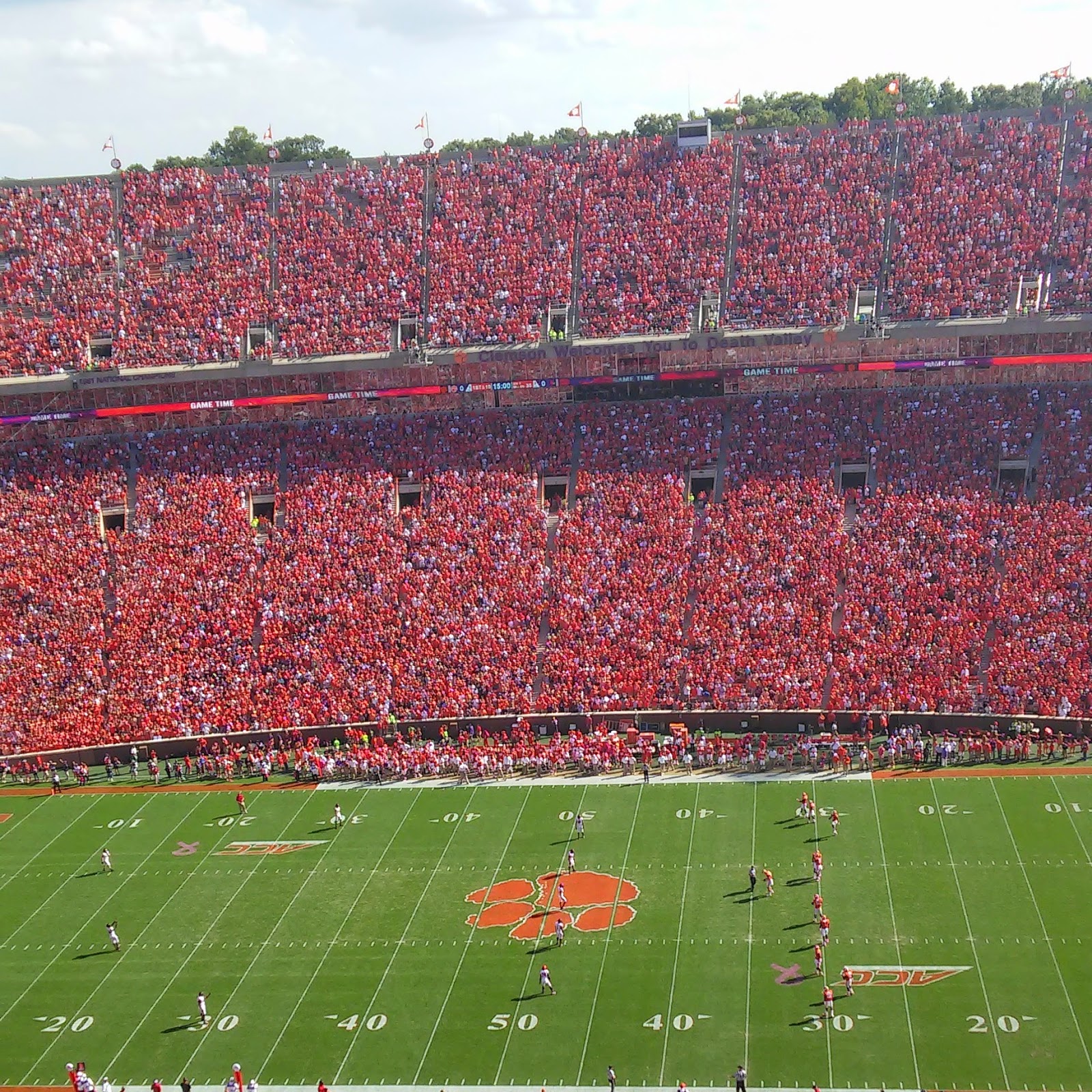 Gameday traffic was a killer, and summarily squashed those plans. Even arriving in town a solid three hours before game time, it took us forever to make our way to our ultimate parking spot, Campus Beach, which still required a shuttle to get over to the stadium. We noticed immediately that the Louisville fans had traveled quite well to this game. This was no surprise; the fanbase tends to travel anyway, and this was their first trip to Clemson as ACC conferencemates. We consumed a few before heading over to the shuttle line and ultimately the stadium, figuring we'd grab a bite to eat inside and at least catch all of the in-stadium traditions. Brian, a Kentucky native, UK fan, and fellow USF alumnus, knows (and dislikes) the Cardinals quite well, but there was plenty to strike up conversation about with the Cards faithful in line for the shuttle. We even ended up chatting Pitino, in the context of trying to recall a Conference USA game where Louisville traveled to USF and their fans may have outnumbered us in the Sun Dome. 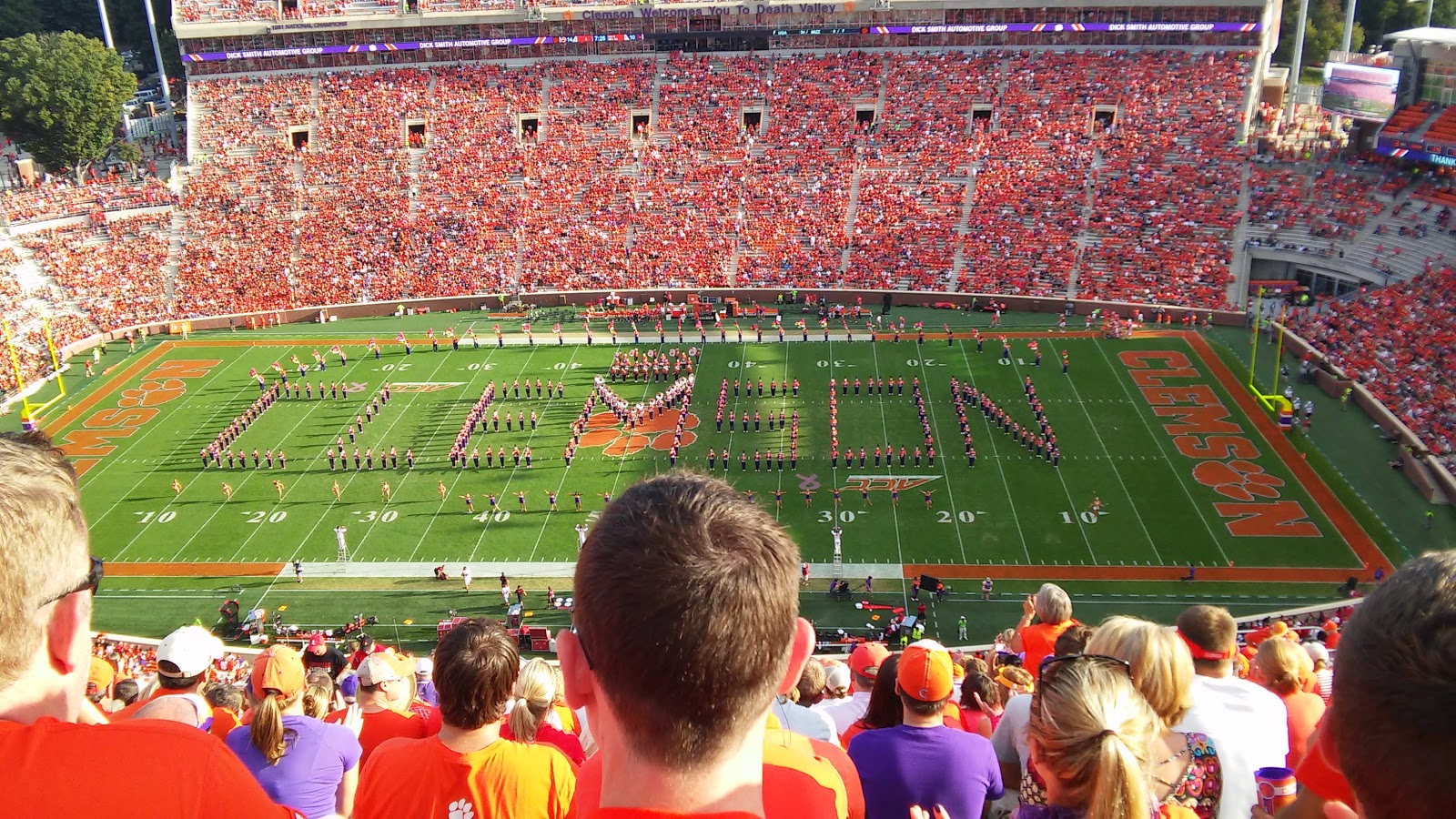 Never have I claimed to be a Clemson fan, but they are one of the major college football programs that's been on my radar the longest, having gone to school with a couple of multi-generation Clemson families. Having been a Tiger - yes, like half of the rest of America - the Tiger Rag holds a special place in my heard, so I didn't mind hearing it, or some derivative, a thousand times during the game. I also realized that this was the largest stadium I've been in rooting with the home team - most other ACC trips have been in support of Florida State, and for last year's North Carolina-South Carolina tilt in Columbia I was rooting - albeit lukewarmly - for my current home state. This past weekend, I was part of the sea of orange. 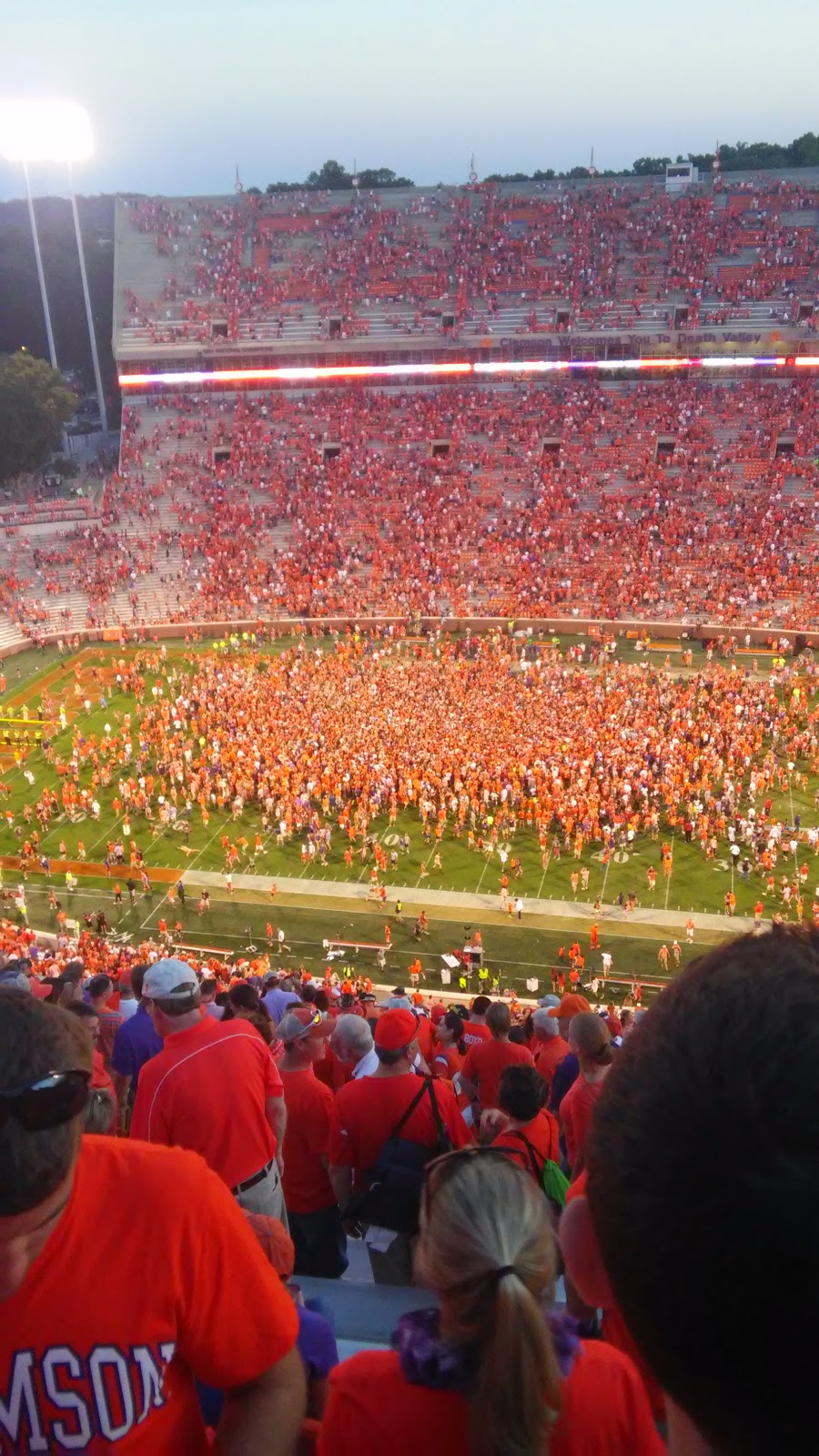 Gamewise, Clemson would prevail without scoring a single offensive touchdown. Quarterback Deshaun Watson left the game early on with an injury to his throwing hands, leaving the offense in the hands of Cole Stoudt. Still the other phases were firing just fine for the Tigers in their 23-17 victory. Each team had an end of half gaffe that lost them an opportunity at points, and in Louisville's case, possibly the game. The Tigers couldn't get lined up quickly enough for a field goal attempt at the end of the first half, and a decision to spike the ball by the Cardinals left them with one last shot from the 3 yard line instead of two as the game came to an end. Had I not heard the announcement to wait until the final cannon to gather on the field, I might have thought the Clemson faithful saw fit to rush the field after a victory over an unranked opponent. Apparently, gathering at the paw at center field is a game tradition. This isn't the first place I've heard of such; I've also attended Wake Forest games where the crowd was invited down to the playing surface. Still, such a proposition seems far more tenable at Wake Forest, where a stadium of just better than 30,000 serves a student body of fewer than 5,000 undergraduates, than at Clemson, where more than 80,000 seats serve an undergraduate population of nearly 17,000. All the same, the goalposts were lowered and the fans joined their team down on the field. 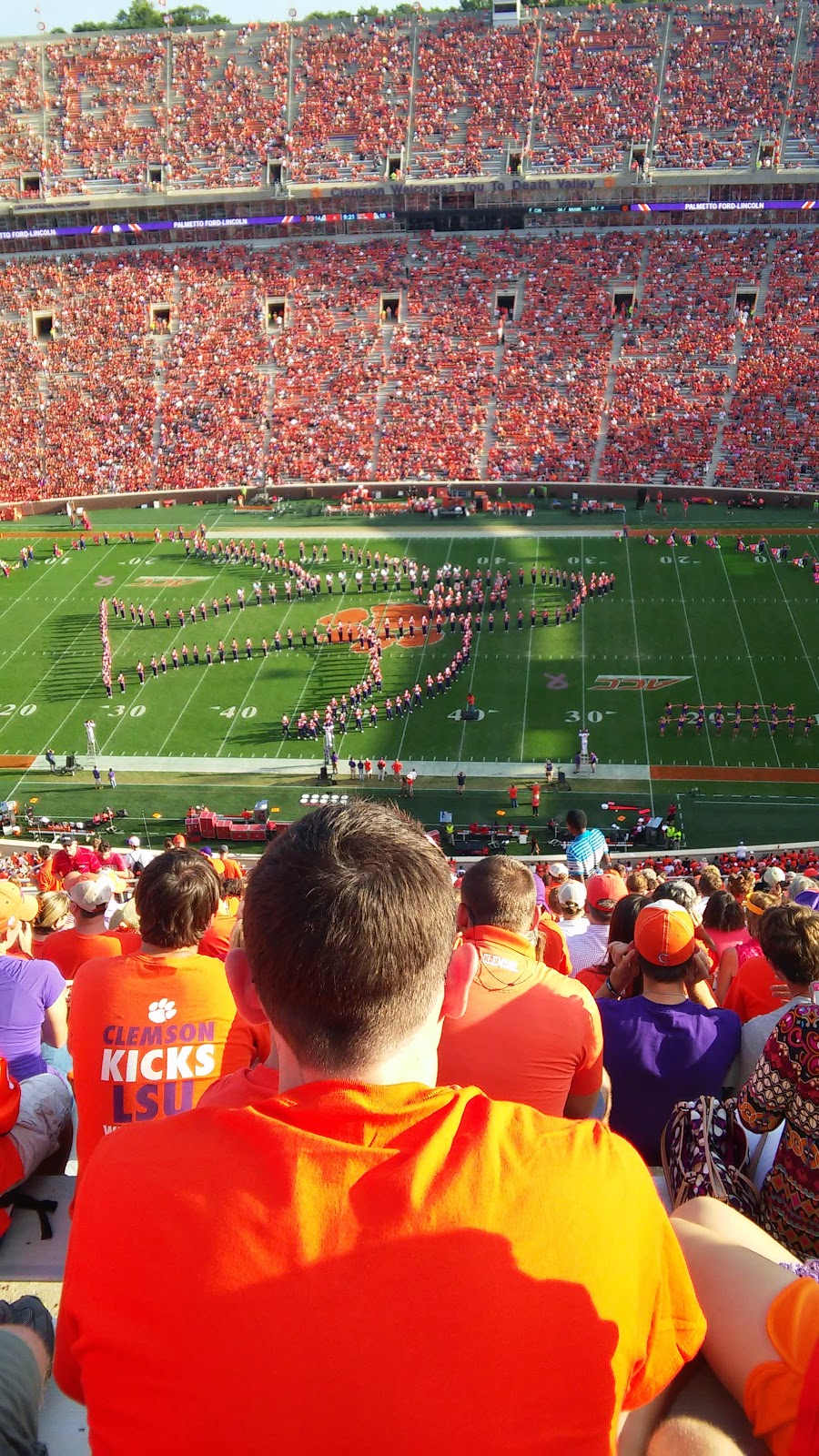 As for the Band that Shakes the Southland, it was great to see them in action, and my top deck north vantage point gave me a great view all game. I was fortunate that they performed their classic rock halftime show to the north stands for this game, giving me perfect seats as they treated us to Stairway to Heaven, Black Magic Woman, and Freebird. In the stands, they were consistent, if not repetitive, but again, Tiger Rag never hurt my feelings. I could grouse that they were miked, but some things are just concessions you have to make in a stadium that large with a fanbase that passionate. They delivered the goods all game long and helped orchestrate an electric gameday atmosphere. And, of course, their pregame leads into what's been deemed the most exciting 25 seconds in college football as the team rubs Howard's Rock and runs down the hill.

I'd agree with what I've heard said: Clemson brings an SEC-like atmosphere, though from my standpoint I base this more on hype and hearsay than an actual SEC gameday experience. The one SEC home game I attended was elsewhere in the same state, and I'd give the nod to Clemson, though admittedly, the difference in the manner I experienced both games makes the two apples (garnets?) and oranges. The folks I encountered there were great, and despite not being affiliated with the host school, I found myself hoping that the Louisville fans found Clemson a gracious host as well. The trip to Clemson from Greensboro's not a bad one, and Brian will be down there for at least a couple more years as he completes his doctorate, so I'm confident this first trip won't be my last.
at 4:03 PM