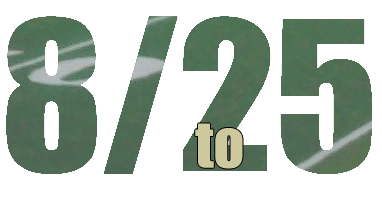 Three years ago, to commemorate their 25th anniversary, marching shoe brand Dinkles declared 8/25 (Eight T[w]o Five, for the marching aficionados) International Dinkles Day. I've since seen fit to seize it as a commemoration of all things marching. The date play on words notwithstanding,  it also tends to fall in the week leading up to the return of college football and marching.

For the second year, 8/25 also mark the release of the Band on the Road Project.

Now in its fourth year, Band on the Road chronicles road trips taken by college marching bands. While the groundwork has been laid by research, Band on the Road is a fully editable spreadsheet, allowing all users to contribute with knowledge they have of band travel. The database is for band fans and football fans alike; after all, when traveling to an away game of your favorite team, it's great to know if there will be a little slice of home there with you.

New for 2014
As much as it hurt my heart as an alumnus of the American Athletic Conference's USF Bulls, the original inclusion of BCS conferences translated to simply including the Power Five conferences as the new iteration of college football's elite. As I said when debuting the series, sticking to those conferences is by scope, not slight; narrowing in this manner allows for a manageable load when inputting the original data. However, because the document is fully editable, anyone with a passion for the other conferences - or even FCS, Division II, or Division III schools - can certainly add them.

I also changed the manner that I include historically black colleges and universities (HBCUs). Because their passion for college marching is unparalleled, I couldn't create such a list without including HBCUs in some format. Previously, I stuck with the MEAC and SWAC, the two Division I (FCS) HBCU conferences, again for the sake of scope. This year's change involves some give and take: I included all of the classics, which omits the week-to-week for MEAC/SWAC schools but includes classics between Division II programs.

Even with one conference down (though to be fair, the American only contributed four confirmed travel games) bands traveling this year slightly out pace last year's road games, 106-102. New columns denote the number of trips per conference, as well as the number of non-conference visiting bands, though the latter is decidedly slim because the only bands from outside the power conferences included are those noted by the host band's site. And while one of my working documents - a highlighted version of FBSchedules.com's helmet schedules - notated speculations of road bands, the numbers here nearly exclusively include travel that was confirmed in some way by band schedule. In a few cases, bands indicate that at least a pep band attends all road conference games; in those instances, such games are included in the schedule. The small amounts of speculation included here are major rivalry games where travel is a foregone conclusion, though neither band explicitly stated it.

All in all, this document gets more robust with each passing year, both as my research improves and more bands make calendars available. Again, any omissions or mistakes you may see are editable, and I empower all users to make those changes as they see fit. Moreover, I will be updating during the course of the season as I notice road bands when watching football, and invite you to do the same.

Email ThisBlogThis!Share to TwitterShare to FacebookShare to Pinterest
Labels: band holiday, band on the road