Yesterday began June, and with it Black Music Month. Established by President Carter in 1979 and renamed African American Music Appreciation Month by President Obama (but I'll stick to Black Music Month, as many have, thanks) the month seeks to commemorates the innumerable contributions to the American music landscape made by black artists.  I think just about every year, "Hey, I'm a black guy, and I write a blog that is at least in part about music. I should do something for Black Music Month!" The thing is, I tend to think this on or around July 1. This year I'm actually on my game, and I will run at least a handful of features linking black music to sports and marching/athletic music. 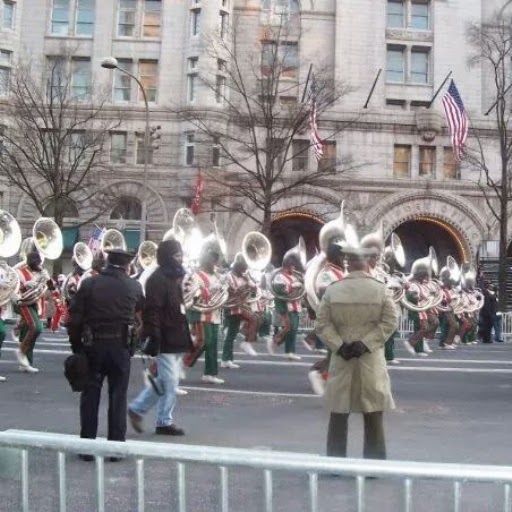 I will first turn the spotlight to an HBCU Marching Band, Florida A&M's Marching 100. While FAMU's dark recent past is well documented, their contributions to marching/athletic music are undeniable. The Marching 100, largely under the direction of director William P. Foster for over half a century, were the gold standard of all marching bands - not just HBCU bands - and set the bar high for all, not the least of whom being themselves as they rebuild from tragedy. The 100 were also the first, and to date the only HBCU band to win the Sudler Trophy.

The Marching 100 are seen here marching in President Obama's inugural parade in 2009. This was not their first, as they appeared in both of President Clinton's parades. The 100 were also not the only black college band in the parade of America's first black president, as they were joined in march by Delaware State's Approaching Storm, Hampton's Marching Force, Howard's Showtime, and Grambling's World-Famed Tiger Marching Band, as well as a number of historically black high school bands.

Read more about the Marching 100 from 80 Minutes of Regulation here.