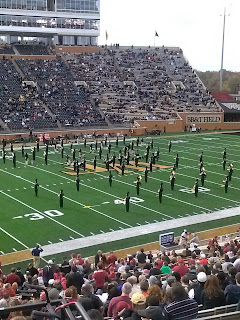 I'm just going to have to ask you to go ahead and ignore me when I put a day/time of day on this sort of post.

I've been critical of Wake Forest's Spirit of the Old Gold and Black Marching Band (SOTOGAB), and I realize that a big part of that comes from a bias I hold: I like big bands and I cannot lie.

A big part of that is my own experience, but part of it is strictly functional. Having always experienced BB&T Field as a visitor, I find myself on the back side of drill and in line with SOTOGAB in the stands, and with the bells never pointed in my direction, they're difficult to hear. While the lopsided nature of yesterday's game put fewer bodies between me and them, getting the full effect was still difficult, though I was able to move right over next to them at one point. Still, while the basketball iteration of SOTOGAB has always impressed me, I find their football version lacking, and it's pretty much for that reason. I don't blame them for this, one bit; Wake Forest is, after all, one of the smallest schools playing major college football, with an undergraduate enrollment of less than 5,000. Their numbers - they march about 50 winds - are decent relatively speaking, but unfortunately, they just don't have the sonic output I'd like. Sorry/not sorry.

That said, I stuck around for their halftime show - I wouldn't not - and enjoyed it, both in concept and execution. They did the world's fastest football game, running through a game (and ultimate Wake Forest victory) through the course of halftime. The game-winning field goal, not unlike this one from Hawaii, animated a giant kicker on the field to put the ball (a flag, which I thought was a great use of guard and preferred to Hawaii's version) through the uprights. There was even a great show-within-a-show moment where halftime of their halftime game was their Jazz 101 halftime show from earlier in the year.

Here's where the Sunday Morning DMing comes in: I can think of just a couple of things I would have done differently with that show. First, maybe it's just me trying too hard to make the band/football team analogy work, but especially since they march four sousaphones, there's no reason they couldn't have been down linemen at some point, especially lined up against the bass drums.

Perhaps most poignantly, though, I think SOTOGAB missed a prime trolling opportunity. I don't know how many uses that show will get this year, but I believe it made its debut at this game. Perhaps it's not the best time to poke fun at the opponent when you're losing 42-0 at halftime, but then, perhaps it's the perfect time. Knowing FSU's history, they instead could have lined the opponent up for the game winning field goal, missing it wide right.
at 7:45 PM