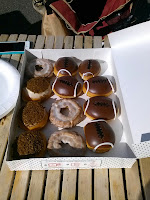 I can't pretend to be a lifelong tailgater. As much as I love it, it's really only been a decade, since I started at USF in 2003. Even so, until relatively recently, I had a pretty narrow definition in mind. Put simply, a grill had to be involved.

I strayed from this a bit a couple years ago when we went fairgating prior to FSU at Wake Forest. While the beers-and-a-bumper piece of the equation prevailed, the edibles came courtesy of the Dixie Classic Fair.

I went a slightly different route earlier this year. With an early start for UNC Charlotte's first home game, I opted for breaking out the camp stove to cook up some eggs, bacon and bagels. A little different, but it's cooking on site all the same. 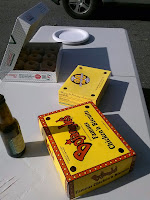 This year, again, at FSU-Wake, I changed the game. Faced with another noon kickoff, I decided that while I was there to see FSU with a couple of alumni friends of mine, the tailgate would be distinctly North Carolina. Going the storebought route for the first time, the morning consisted of sausage balls from Biscuitville, biscuits from Bojangles, and doughnuts form Winston-Salem's own Krispy Kreme. The beer from Red Oak made for a tailgate firmly rooted in North Carolina's Piedmont.

On the one hand, Bojangles would be glad to see that their #TailgateEverything campaign at least served to claim one more tailgate, but from my standpoint, the call made good logical sense. The members of my crew for this game traveled to Winston from Greensboro and Charlotte. Firing up the grill prior to the nooner wouldn't have been practical, or would have at least required us to arrive in the lot a good deal earlier. The camp stove could've come back out, but I think the call we made was the right one. So while the grill came out for the postgame, the "catered" pregame was certainly the ideal move.
at 11:08 PM