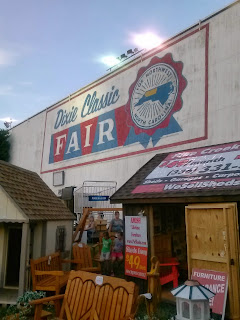 My east coast bias almost got the better of me. I knew that both Notre Dame and Arizona State's bands were traveling to the Shamrock Series showdown in Jerryworld, but I failed to realize until much later that this was a dual Sudler matchup, mostly because I had forgotten that the Pride of the Southwest won, quite a few years before Notre Dame ever did. The game didn't disappoint one bit sonically, so I'm giving this one to both bands.

In the open playbook, I've got to give it up to the Dixie Classic Fair. This was the site of fairgating two years ago when it lined up with the Florida State game. Wake was home this weekend, against NC State, and I hope some folks took advantage. I went with my wife and daughter, let the little one get on rides (and had to accompany her on one), watched a double figure 8 race, and checked out all the goods the fair has to offer. I got my fill of fried fair food, and came to a realization: While I went to the FSU game with my friend James an alumnus, it was more or less football-for-football's-sake from my standpoint. So it made me think: Why not do it again? It was the perfect mix of fall, football, fair, and beer, and spaced it all out over the day for maximum consumption. Had I done it this year, I would have made it to a band on the road game as well, since the Power Sound of the South made the trip from Raleigh. I'll have to keep an eye on Wake Forest's schedule this coming year to see if I can bring this glorious pairing about again.
at 10:50 PM