Battle for the Buckeye State 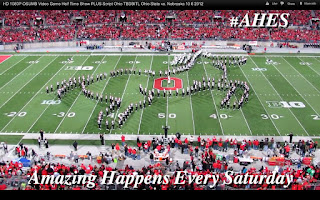 If I may quote myself again, from the post that spawned a series:

When things like this blow up... it's always interesting for me, doing what I do. I usually get a couple of questions: "Did you see that? Wasn't it amazing?"

To answer the first: Chances are quite good I'm the biggest band nerd you know, and as such, yes, I've probably seen it.

For the second--Wasn't it amazing? In most cases, if it's being passed around, yes, it is amazing. But here's the thing: Amazing happens every Saturday on football fields throughout the country, and a lot of it happens when the game clock isn't running. Amazing happens in a variety of marching styles, with a variety of musical offerings, and it happens largely out of the view of television cameras, and sadly, also out of the view of live spectators who take the opportunity to grab a beer instead of watching what's going on on the field. The band featured in particular makes amazing happen pretty much every time they strap on their spats. So I'm sure you'll allow me the role of both hipster and evangelist when I say yes, I've been seeing marching bands do great things before it went pop. I encourage you to get out there and check it out yourself.

All that said, I say with true sincerity that I'm flattered and humbled that when many folks I know think of marching bands, they think of me. The video I'm about to share was posted on my wall or tagged with me no fewer than four times on Facebook, with still others referencing it in person or elsewhere. So yes, I've seen it, but I appreciate y'all for thinking of me.

Christy over at Diary of a (Female) Bandhead, who had a similar experience, did point out that this sort of form has been done by HBCUs, but it doesn't make it any less amazing. I'd add that this going viral is evidence that the larger audience can appreciate the concrete. With all due respect to curvilinear drill and Z-Pulls, something that's very easy to see makes crowds happy.

And finally: I never intended for Amazing Happens Every Saturday to center in the state of Ohio, but if the Marching 110 and TBDBITL keep bringing it, I'll keep recognizing it. That said, someone did point out to me that an early version of an article incorrectly attributed Ohio U.'s Gangnam Style and Party Rock Anthem to Ohio State. Thankfully, someone fact-checked them on that quickly.
at 11:28 PM