A D-League of our Own 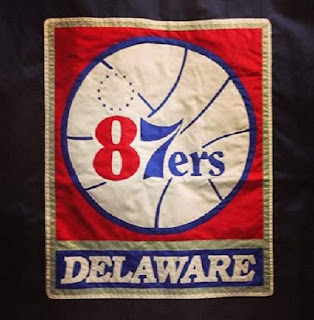 The state of Delaware once again has a professional basketball team, this time competing at its highest ever level as a member of the NBA's D-League. The team, a D-League affiliate of the Philadelphia 76ers, will play its games at University of Delaware's Bob Carpenter Center. Its name? The 87ers.

OK, it could've been worse. We could've gone with the Ratifiers or the Tax-Free Shoppers. It's not as though I don't get the rationale. Delaware ratified the Constitution in 1787, making it the First State. But here's the thing. 1787 isn't unique to Delaware, as both Pennsylvania and New Jersey would also ratify before the year was out. What's more, while the team is a Sixers affiliate, 87ers just sounds like it's trying too hard, especially for a state that constantly lives in the shadow of Philadelphia.

I don't know who they asked, but they didn't ask me. I've been making up names for faux Delaware pro teams nearly all my life. Here's some of those, plus some others that I came up with out of the blue, that I'd offer as alternatives to 87ers.


But my personal favorite? The Crossovers. Granted, it takes a slight historic inaccuracy to see the reasoning, but bear with me here. One of the primary historical references with Delaware in it is the General Washington's crossing of the Delaware River, though he crossed between Pennsylvania and New Jersey. Beyond that, the D-League is not above using basketball terms to name their teams (looking at you, Los Angeles D-Fenders). But perhaps most poignantly - and this may seem Stannish - the name invokes one of the players known best for his crossover, Allen Iverson. Iverson played for the parent franchise, and like the state of Delaware is small in stature but of great value.
at 9:28 AM