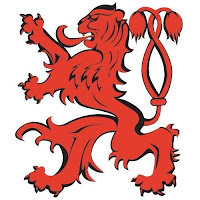 In times of tragedy, we sometimes look for ways to shorthand our support; a quick, easily identifiable symbol to let those affected know that we stand with you. Often, this comes in the form of sports logos. After all, in many cases, this is the primary point of connection with a city with which one may not otherwise identify. Further, because sports tend to be something about which many are passionate, it can be particularly poignant when fans can lay aside a rivalry in support of a greater cause, as the Yankees have done tonight.

While baseball's continued status as our national pastime can be questioned, its logos are undoubtedly still the go-to for such displays. After all, more than any other league, most of MLB's logos incorporate the location's primary letter, meaning they often transcend just the team and become a symbol of the city. In the time following 9/11, the Yankees' interlocking NY became synonymous with support for New York, and in the aftermath of yesterday's bombing, the Red Sox' iconic B has taken on that role. Indeed, it was second nature to reach for my Red Sox cap when leaving my house this morning.

Still, in the face of the recent tragedy, I'd submit the logo of the Boston Crusaders Drum and Bugle Corps. The Crusaders incorporate a rampant lion, a heraldic symbol signifying strength, valor, and bravery. In these tough times, it is precisely what the people of Boston, and indeed, all of us, are displaying.
at 10:23 PM

Good blog along with the excellent quality stuff and I’m sure this will be greatly helpful.
https://www.travelblog.org/North-America/United-States/blog-1032023.html