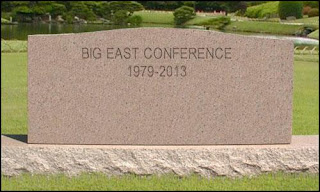 I never thought I'd find myself eulogizing the Big East Conference. While I've spoken plenty of its demise, I've got no right to speak at its funeral. After all, I'm an alumnus of one of the football Johnny-come-lately schools, a school which, other than a spark in the 2011-2012 season, has absolutely no birthright to the rich tradition that is Big East basketball. Perhaps that's precisely why I saw what I saw, and why I feel compelled to write this.

The championship game of the final Big-East-as-we-know-it Tournament provided a perfect allegory for the downfall of a once great conference.

Syracuse and Louisville arrived at the same point by two very different means, in more ways than one. Syracuse was an architect of the grand experiment that became the Big East Conference in 1979; Louisville joined during its last expansion in 2005, a last-ditch effort to save the conference after Virginia Tech, Miami, and Boston College were poached by the ACC. Both are now ACC bound; Syracuse was an addition as the conference decided to expand to 14 (now 15) schools; Louisville was added to replace the University of Maryland-College Park after it announced its departure for the Big Ten.

1 Timothy 6:10 is often misquoted. "Money is the root of all evil," quote many, but in full, the love of money is the root of all evil. Likewise, some will claim that football killed the nation's greatest basketball conference, but it was the love of football, its ever growing contracts, endless paper chase, and the realignment that was precipitated by it all, that killed the Big East.

As the conference swansong began, it seemed that a night in which all things Big East basketball were celebrated would be a coronation of the old guard. Syracuse dominated the first half, entering the locker room with a 35-22 lead and leading by as many as 16 in the second half. But when Louisville awakened, it took a lead off of a 24-3 run and never looked back. From that point on, it was all Cardinals, leaving those watching to wonder what they had just witnessed as the final seconds ticked away from the Big East Conference.

There's something perversely poetic about the end of the Big East Conference coming as a conference newcomer takes down an original member. Louisville is the conference's current football champion (to be fair, so is Syracuse, in a four-way tie that further highlights the absurdity of Big East football of late, but Louisville was the BCS representative) and was a member of Conference USA just eight years ago. The two will part ways for just a season, as Syracuse heads to the ACC and Louisville plays one year in the yet-to-be-named conference containing the remaining Big East football schools and additions, before being reunited when Louisville joins the ACC in 2014.

The Big East isn't dead, some may say. Indeed, a Big East tournament will play a year from now, in Madison Square Garden. But the Big East, as long recognized and celebrated, has died. It may have died tonight. It may have died back in 2005 and it's just been Sixth Sensing it ever since, because we all wanted to believe. But after this season, the founders will be scattered to the four winds. Boston College has been gone for nearly a decade. Georgetown, Providence, St. John's, and Seton Hall will carry the name into the new conference, with Villanova and newcomers Marquette and DePaul. Syracuse, much to the annoyance of head coach Jim Boeheim, will play its next conference tournament in Greensboro, NC, and Louisville will spend a year in limbo before joining their foes from tonight in the Gate City. No one extant entity will lay a legitimate claim to the history of the Big East, but it is possible the conference's entire story was told tonight in 40 minutes.
at 1:20 AM