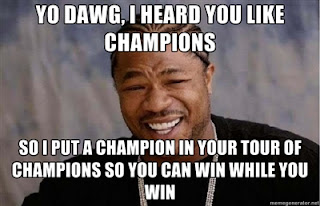 After having only referred to it as a "special series" in an earlier announcement, DCI recently announced the return of the Tour of Champions, this time featuring just seven corps; unsurprisingly, the same seven who keep throwing their weight around. This year, there's a potential new wrinkle - Santa Clara Vanguard's Jeff Fiedler shared the following:

“The scores for each Tour of Champions event will be based on the DCI judging system, however, we've been discussing a sequential scoring system that will result in a season-long champion at the end of the series”

To be honest, this doesn't make a lick of sense to me. The Tour of Champions, by their own bombastic naming convention (never mind that not all corps have been champions at the World Class level), is already almost certain to yield the DCI champion. If the TOC events are using the DCI judging system, what does a series champion prove? Either one corps will win both this championship and the World Championship, making the former redundant, or one corps will happen to catch fire for these seven specific events, giving them an also-ran title that will ring hollow in the face of the actual championship.

There are a few ways that a new title could be introduced to DCI in a way that makes sense. If DCI were to break into conferences - a move which could ease the tour burden on some of the less prominent corps - it would make sense to crown a champion of each conference, not unlike the way major sports operate.

Crowning a Tour of Champions champion would make sense if and only if it uses a difference scoring rubric than the tour in general uses. Otherwise, you're simply re-rewarding that which the system is already set up to reward.

There's one more championship that could make sense. If the Tour of Champions corps truly wish to be separate, fine. Why not add a "best of the rest" championship? You could make the TOC corps their own division (or subdivision, a la college football) and reward an additional champion from the remaining World Class corps. This way, perennial finalists who have little shot at winning it all have their glass ceiling removed in a way that could add intrigue to the activity.
at 10:40 PM

Email ThisBlogThis!Share to TwitterShare to FacebookShare to Pinterest
Labels: Championships, DCI, The Undersigned, Tour of Champions