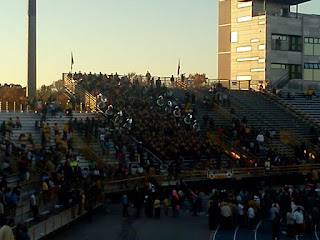 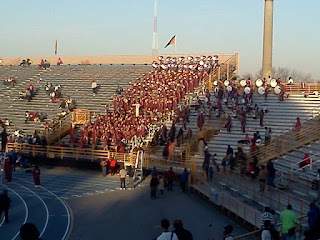 SC State had bested the Aggies the previous 11 meetings coming into this past Saturday's game. The Aggies ultimately emerged victorious, 17-7, over the visiting Bulldogs to snap this streak. But as you can probably guess, this post isn't about football.

The premise upon which this blog is founded is that I enjoy both sports and marching/athletic music. And while I know this stands on uneven footing in favor of my band side, never has the imbalance been as evident as it was this past weekend. I realized very quickly that the football game served only as a conduit to get the two bands directly into my veins.

To be fair--and one of the few detriments I'll mention about the day--the bands didn't much care that there was a football game going on either. While SC State's Marching 101 typically responded on first downs and on their Bulldogs' lone touchdown, the Blue & Gold Marching Machine couldn't much be bothered to acknowledge that a game was taking place at all. While I am a band nerd first, it is my belief that in a game situation, the band's first duty is to support the team.

That said, it didn't keep me from thoroughly enjoying the battle that took place for all of the requisite 80 minutes and then some. I began the game sitting next to A&T's band (conversation with a gentleman in my section, a Vietnam vet and former Aggie football player: Him: You know the drumline will be right there? Me: That's why I'm here.) and following both halftime performances, made my way to the other end to get a closer look at the 101. After the game was over, I went to the midway point between the bands--behind the goalposts--for a fair and balanced take on the 5th.

The two bands went at it all game long and into the 5th. I've captured one of the key matchups here, across two media: Sadly, my Flip battery died right as the 101 was starting Hay, so I had to catch the rest in much diminished quality on my phone. Here they are:

There'll be far more video coming once I get everything uploaded; I'll probably do a second post here and share it all over on the YouTube channel.

After Saturday's game, I couldn't help but admonish myself for living across town from A&T for the past 7+ years and never attending a game. This is something I'll certainly correct in the future. I knew I was headed to the right place when I purchased my tickets online and the seating chart clearly delineated the seating for the home and visiting bands.

To answer the question that's likely on everyone's mind: Who won? While both bands definitely brought it, I think I'd score this one for the 101. I could further subdivide and give some sections to the Marching Machine, but SC State took halftime (A&T had far too much park and bark for my tastes) and narrowly took an excellent 5th (the clincher was the 101's rendition of Someone Like You. Extremely well done, and with A&T following up with a medley that included the same piece, it made my preference for SC State's version clear). Sadly, the battle we didn't get to see was the up close and personal battle. A&T's Cold Steel drumline blocked up down on the field, but in what originally looked like a 101 retreat, I learned later that Greensboro PD stopped both bands from going toe-to-toe. All of our loss, really.
at 5:43 PM

Email ThisBlogThis!Share to TwitterShare to FacebookShare to Pinterest
Labels: band on the road, game of the week, HBCU, high notes, NC A and T Aggies, rivalry, South Carolina State Bulldogs