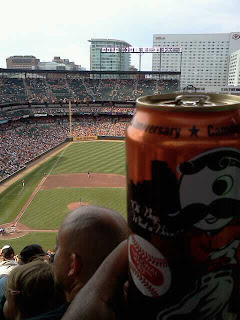 It's a weeknight in early October and I'm watching sports.

And no, it's not USF losing on a Thursday night.

I'm watching the Yankees and the Red Sox play. Yes, you may remember I don't typically give a rip about baseball. And despite being a Red Sox fan when I do care, I'm actually watching on behalf of the O's. In case you missed it, the O's are playoff bound for the first time since 1997, and currently have a (rapidly waning as I type this) chance at winning the division. The most likely outcome currently is headed to Texas as the second AL wild card team for a one-off against the Rangers. I conceptualize it as a play-in game, but if MLB calls it the playoffs, hell, it's the playoffs.

A ton of folks I care about are downright giddy about where the O's are finding themselves this season. And to be honest, I'm right there with them. The O's are beloved by people I love and a city I love, and having minimal other interest--even if I cared more, the Red Sox are garbage this year--it's good to see them succeed. I've actually been paying attention to what's been transpiring over the past few weeks, definitely a different spot for me. I'm glad to see the long-suffering O's fans--not the least of which is my wife--get their due.
at 9:45 PM