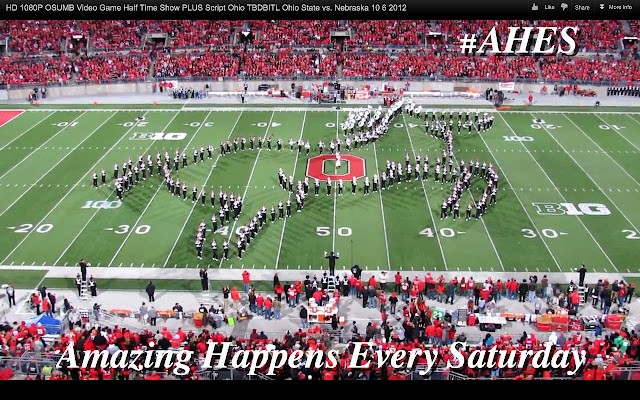 But here's the thing: Amazing happens every Saturday on football fields throughout the country, and a lot of it happens when the game clock isn't running. Amazing happens in a variety of marching styles, with a variety of musical offerings, and it happens largely out of the view of television cameras, and sadly, also out of the view of live spectators who take the opportunity to grab a beer instead of watching what's going on on the field. October 11, 2011

It was just a line from a post that's turned into a bit of a recurring theme. At the time, I was talking about the Marching 110's performance of Party Rock Anthem, which had recently gone viral, and more broadly, other marching shows that gain pop appeal through viral means. Shortly after that post, the folks who run the UConn Marching Band's Twitter separated out what has become the tagline, and a concept was born. We're seeing halftime shows gain internet fame more frequently now, and while I love it and think it's good for the activity, I maintain my stand that Amazing Happens Every Saturday.

That's where you come in. If you come across Amazing on any given Saturday (or Thursday, Friday, or any other time) please share either an account, photo, or video of what happened. They can be shared over on the 80 Minutes Facebook page, or on Twitter using the tag #AHES.
at 11:46 AM