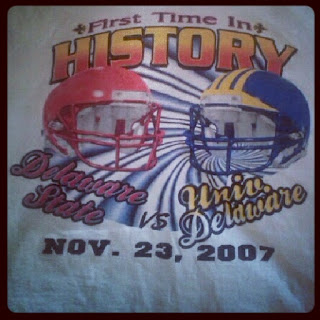 This weekend, Delaware and Delaware State meet on the gridiron for the third meeting of the "Route 1 Rivalry" and just the 4th time overall. I was at the historic first meeting of my home state's two Division I programs, and while it's been posted on this blog once before (and once before this 80 Minutes of Regulation even existed) I hope you'll humor my retelling of it here.

So, the Battle for the First State: Been there, done that, got the T-shirt.

No really. There's a t-shirt. I'll post a picture once I'm back home. (Editor's note. That's it, at left)

So today, as a native Delawarean and bona fide First State Representer, I traveled to Newark to watch Delaware history: The University of Delaware and Delaware State University facing one another in college football. I was firmly planted on the fence as to who to root for during this game. Here is the thought process that went into my (non)decision:
-I grew up in Wilmington, DE, and spent significant time on campus at UD, as my dad works there. Advantage: UD
-UD is clearly the aggressor in their previous 84 years of non-play. Advantage: DelState
-I've got friends at both schools. Advantage: none.
-I'm a Northern Delawarean. Advantage: UD
-I'm black. Advantage: DelState.
-Approaching Storm vs. UDMB: Advantage: none. (while very different, they are similarly good at what they do).
-UD likely has the best chance of bringing home another national championship. Advantage: UD.
-DelState success would be good, as they've never so much as been to the playoffs before. Advantage: DelState.
So with a wardrobe that was pretty much equal parts blue and gold and blue and red, topped with a Wilmington Blue Rocks (DE's minor league baseball team) cap, I was on my way.
The verdict on the field notwithstanding (44-7 in favor of the Blue Hens), I think most who attended would agree that this is a series that needs to continue as a regular season matchup. Anecdotally, I overheard several conversations between fans of both schools talking about how great it was, saw fraternity brothers from their UD and DSU chapters getting together, and what was more than just an amicable but actually an enjoyable relationship between the two sets of fans. And the elephant in the room, race, did not seem to be an issue at the game. There were many black UD fans and, admittedly surprising to me, a good amount of white Del State fans as well.
So while I snuck out a little early (the scoreboard, combined with the fact that the majority of my football attendance in the past few years has been in Tampa, not the mid-Atlantic in November, made it seem the right decision) I truly believe that a good time was had by all. My only regret is that there's not a bigger stadium in the state for them to play in.