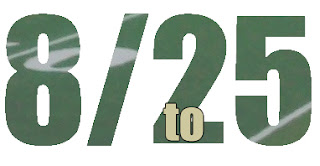 I'm just going to go ahead and declare it a holiday.

Actually, I can't entirely take credit for that, as Dinkles, one of the premier marching shoes, did it last year when they declared it International Dinkles Day. In addition to the brand celebrating its 25th anniversary, the date was fitting: 8/25, or 8 2 (to) 5, a standard size marching step that covers five yards in eight steps.

Moving beyond the brand loyalty to Dinkles, however, I think it's a great day to celebrate all that is marching. In addition to the date itself, consider that it's also close to the start of football/marching season. This year, 8/25 sits exactly one week before college football's first Saturday, making it the start to a glorious week that will see the return of marching.

Here at 80 Minutes of Regulation, we'll be celebrating with the release of 2012's Band on the Road Project a little later this evening. There's also been some marching goodness shared on Facebook and Twitter. Enjoy!
at 7:03 PM

Email ThisBlogThis!Share to TwitterShare to FacebookShare to Pinterest
Labels: holiday