What else is there? 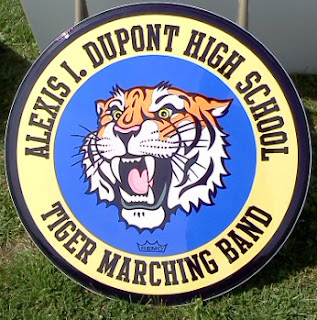 We have one and only one ambition. To be the best. What else is there?

I don't know when the sign appeared, but I know the ambition first walked through the doors in 1976, and has walked out more than a thousandfold in those who have since left that room striving for the same ambition.

Last weekend, I made the trip back home to celebrate the retirement of Mr. Paul Parets, director of bands at A.I. for over three and a half decades. While I didn't halt for a second in my decision to make the trip from NC to DE to celebrate the career of such a remarkable man, I did think for a moment: I'm 13 years out of high school  I've finished two college degrees, started a career, gotten married, started a family, purchased a home, and a host of other achievements in my 30 years on this planet. Am I really still reaching back to some great times and a few dozen trophies from high school like a high school quarterback whose career peaked at state championships?

Yes and no. I don't hesitate for one second to acknowledge that we--it will always be we--as a band strove for excellence and quite often hit our mark. It was that excellence that has placed the band on some of the highest stages, among them presidential inaugurations, performances for the Pope and Queen Elizabeth II, St. Patrick's Day in Ireland, and five trips to the Rose Parade. It was the excellence that filled the band room with trophies from every competition the band participated in for decades. And yet it wasn't the trophies or even the trips that led hundreds to Tiger Stadium to celebrate the career of the Tiger Marching Band's chief architect. It was the experience.

While the band achieved excellence, it was actually a byproduct of the actual goal: The education and personal excellence of its students was paramount. This wasn't solely about the accomplishment of a body that at times numbered nearly 300. This about the accomplishment of those 300 individuals and their collective responsibility, not the least of which was to one another. This is what led the band to success. At the ceremony itself, it was clear quite a few of those individuals came--from at least as far as Colorado--to honor a man who had meant so much to them.

What was also clear was that we had all meant a great deal to him as well. While waiting to have audience with the guest of honor, I saw any number of alumni years and decades my senior come up to Mr. Parets. To a man, he knew them all, either immediately by sight or with a quick name, and in most cases could recall something about them either from their marching days or from their present life. Keep in mind, again, that the band at time numbered nearly 300 and Mr. Parets' career spanned 36 years. As Mr. Parets has always told us, life is a memory, and it was clear that each and every one of us murderers, thieves and sex perverts--one of his pet names for us--was a part of his life.
at 2:27 PM