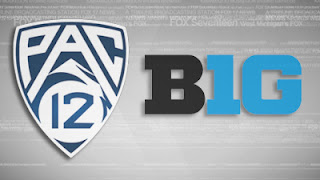 From the time that any talk begane regarding a playoff in major college football, two conferences, partners towards a common purpose, have remained in stalwart opposition: The Big Ten and the Pac-12. Within the past few weeks, we learned that at least one's position has softened, as Big Ten commissioner Jim Delany put forth a proposal for a four-team playoff. Still, one part of his tune remains clear: Protect the Rose Bowl at all costs.

Indeed, the Rose Bowl has been the lynchpin to any postseason talk for the Big Ten and Pac-12, partners in the bowl game for the better part of seven decades. Since many have treated bowls and a playoff as though they are mutually exclusive, those two conferences have sided with the bowls, and specifically the Rose Bowl. And why shouldn't they? The Rose Bowl first came into existence over a century ago. It, and the Rose Parade, which predates the game by over a decade, have long been synonymous with New Year's Day in the United States. The Tournament of Roses festivities far predate bowl season becoming the corrupt, bloated, moneyed mess that is now is. Still, it's easy to see the Big Ten and Pac-12's previous stance as clinging to a singular event at the expense of progress.

Now full disclosure: I'm an east coast kid. I have no legitimate ties to the Big Ten or the Pac-12 save for a general admiration of the Big Ten's marching, and yet I share their reverence. For starters, I've been there. Not the game, mind you, but the Rose Parade, which I marched in my senior year of high school. In fact, if I may, I'll not-so-humbly point out that at five appearances, my alma mater has participated in Tournament of Roses festivities more than half of the Pac-12 and as much or more than 3/4 of the Big Ten. But it's more than that. The Rose Bowl, as much as any part of college football is about tradition. The parade. The fact that the contractually obligate the network to show at least a portion of halftime. The stubborn loyalty to appearances by those two conferences if at all possible. Even the fact that in a season rife with commercialization and corporate sponsors, the Rose Bowl at least forces theirs to take a back seat, being presented by Vizio as opposed to being the Vizio Rose Bowl. It is no mistake that we know it as the Granddaddy of 'em All.

While I am glad that Jim Delany has reversed course and we're now looking at a playoff option (interestingly enough, I've heard nothing from Larry Scott, Pac-12 commissioner) I am similarly glad that the commitment to protecting the Rose Bowl remains unchanged. In a college football landscape that is seeing century-old rivalries thrown out in the name of the money-grab that is conference realignment, it's nice to know that this stalwart may remain.
at 6:16 PM