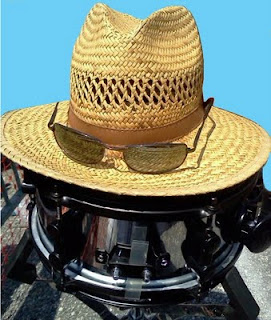 This 4th of July, I came out of retirement. Sort of. As you all know, I'm a band fan and enthusiast, but what I mention less often--though it's fairly evident--is that I"m a has-been. I haven't played the drums in an organized fashion or been a part of an actual band since I departed undergrad eight years ago. I changed that earlier this week in a quest for a world record.

In an event put on and mostly publicized by a local television station, there was an attempt here in Greensboro to gather 1,776 drummers to set a new world record for number of snare drummers doing a roll at once (the record was set at 1,682 in Germany). When I first caught wind of the attempt, I knew I was in, and my parents set out to grab my snare out of storage in Delaware. Various snafus led to a new snare for me--thanks, Mom!--and as expected, I headed downtown on the 4th to participate.

It was hot. Powerful hot--somewhere in the mid-90s at showtime. Still, it was a fun experience to be among drummers from what seemed to be every walk of life in the contained area where the attempt took place. I had joked earlier that week about the egos that would be present if it were truly 1,776 snare drummers in one place, but the opportunity to be with that many drummers, regardless of primary drum or avocation, was quite cool (though my kingdom for a bass or a set of quads!) And while we left the event not yet knowing if we made the record--we didn't, although we apparently set a new record for the US--I think those involved had a good time. I know I did.

Meanwhile, a couple hundred miles away...

I got an e-mail as an alum of UMBC's Down and Dirty Dawg Band that alums were welcome to join the band in the 4th of July parades in Arbutus and Catonsville. Clearly I'm no longer in the Baltimore area, but I was glad to hear my old band was doing this. To rewind nearly a decade, it was the summer of 2002that we got the first field drums for the pep band, and for Homecoming 2002, we took to the streets for the first time in the Homecoming parade. In spring of 2003 (coincidentally following, but unrelated to, the release of the movie Drumline) the Dog Pound Drumline made its debut, performing at FunkFest. I crossed the stage after that semester, but I've been watching the band like a proud poppa ever since, and it's so good to see them doing big things.

Editor's note: I've got a survey I'm doing to take a look at this blog and its overall picture If you're reading this, please consider going one post back and providing feedback. Thanks!
at 11:15 PM