Happy new year, everyone! A Year In Review will be coming soon, but for now, as I watch today's New Year's Day action, I'll recap the trip down to Charlotte to witness a Bulls victory in the Meineke Car Care Bowl.

Apparently my tailgating gear expands like gas, because even in my new vehicle, it took up the whole trunk and spilled into the back seat. I got down to Kristy's at about 3:30 and we headed uptown and grabbed some food before heading to the Square for the pep rally. As was to be expected, Bulls outnumbered Tigers at the pep rally, since the Clemson faithful could easily make the trip on Game Day. The "battle of the bands" that ensued was really more of two short concerts; both bands did four pieces in a row, no back-and-forth. Both bands did a dance number; for the HOT it was the sousaphones doing Single Ladies (quite entertaining, I might add) and Clemson did Michael Jackson featuring their drum major and dance team. after running a quick errand (Kristy had a hookup with a parking pass) we headed back uptown to try and catch the rest of the Bulls faithful. While we never caught the folks I knew at Whisky River (the official Big East bar), we did catch the CRAZY end to the Music City Bowl with a couple locals and some Clemson fans.

We got up early at Kristy's in Charlotte and headed uptown to catch up with the folks I knew. Kristy's a UNCG alum and as such had never been tailgating; she told me this may have spoiled her. The Bulls faithful were small but mighty. The folks from Bulls Outfitter had a pretty serious setup with inflatable Rockys, and my boy Brandon had a full DJ setup. We were also fortunate that we made it to that particular lot before there was anyone on duty. An attendant came by later attempting to collect, but apparently I was persuasive in pleading my case. 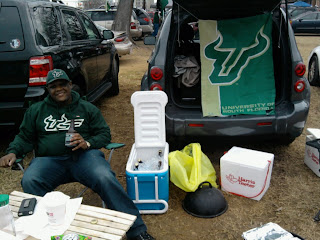 While the tent and cornhole boards ultimately stayed in the car,  we had a decent set up. As I mentioned before, I got breakfast casseroles from New York Butcher Shoppe and they did not disappoint! And just because it felt like the right thing to do, I brought along a snare stand and pad that doubled as a second table. But what made it was the people--I was able to catch up with quite a few folks from my days at USF who were up in town for the game.

Kristy, Jenni, and I headed into the game (unfortunately, a death in the family kept my friend Lauta from attending) towards the beginning of HOT's pregame. At that point, we had missed Clemson's. Both bands played the Anthem, under the direction of Clemson's director. Kristy was wearing the "Bullshirt" I loaned her that was given out to student organization leaders during my time there; we ended up chatting with the guy behind us who was a former officer with the indoor percussion ensemble. Needless to say, I was a little geeked.

I actually didn't know much about what to expect from this one. Of course I wanted a Bulls win, but I thought the teams were pretty evenly matched and that it could have gone either way. I was pleased when USF scored their first touchdown; it meant we wouldn't leave Charlotte empty-handed as we did last time. We pulled up 17-3 before a few Clemson scores made it 17-13 at the half. A little closer than I would have liked, but it was a lead, and the play on the field had me feeling good.

The showing in the stands from both bands was comparable; our seats were nearly equidistant from both and I've give the slight edge to USF on sonic output. I liked our stands tunes better, but that's a clear bias. Clemson killed us with some of their varied horn swings, though. Clemson also had the benefit of easier field access, giving them more more time in the stands both before and after the half.

Herd of Thunder's halftime show rocked, including Weather Report's Birdland. In contrast, I wouldn't have picked Clemson's halftime show, which ended with Beethoven's Ode to Joy and most certainly did NOT shake the southland.

The second half reminded of USF at WVU back in 2006; a lead in the second half led me to believe, "we're actually going to do this," followed by a run that led me to think, "we better not screw this up..." Indeed, as with the 2006 game, Clemson pulled within five. A half-yard early illegal touching penalty after an onside kick gave the Bulls the final possession and the win.

I stuck around through the trophy presentation and the alma mater. One small blemish--don't know if it was miscommunication or disrespect--is that the Herd of Thunder played The Bull over Clemson's alma mater. Maybe it's just me, but it is my belief that if there is anything you don't play over, it's the alma mater, regardless of the school, so that was a bit beat up. Regardless, I saw a USF bowl win, ended my post-season drought (that I mention in the last paragraph here) and drove home with my flags waving high. Go Bulls! \m/
at 1:07 AM